The Sale
382 products
All Baskets

Since Fairtrade Fortnight's aim this year is to highlight the challenges climate change presents to rural farmers, we’d like to show you a short film we have made about the chairlady of one of the basket weaving groups we work closely with in Kenya: Madam Dorcas Ndinda, a farmer and greengrocer.

STEP INTO MY OFFICE...

With the beginning of a hopeful new year and home working likely to be a long-term cultural shift all over the world, it feels like a good time to get more intentional and creative with our home work spaces. With most of our team now largely working from home both in the UK and in Kenya, we’re having discussions about what rituals, adaptations or small purchases are helping us work better and work happier. This year, the Fairtrade Foundation is telling the stories of female cocoa farmers through its #SheDeserves campaign. We’re delighted to see the spotlight on women for Fairtrade Fortnight since the vast majority of our incredible weavers are female farmers. Like the cocoa farmers in West Africa, our weavers are juggling the demands of family life with the ups and downs of agricultural work and drought – weaving their wonderful baskets when and where they can for a more dignified life.

A new interiors colour palette is melting its way into our awareness as spring ebbs into summer, and it’s a revisiting of gentle, earthen tones like terracotta and taupe, gold, peach and blush. It's just a little bit gorgeous... 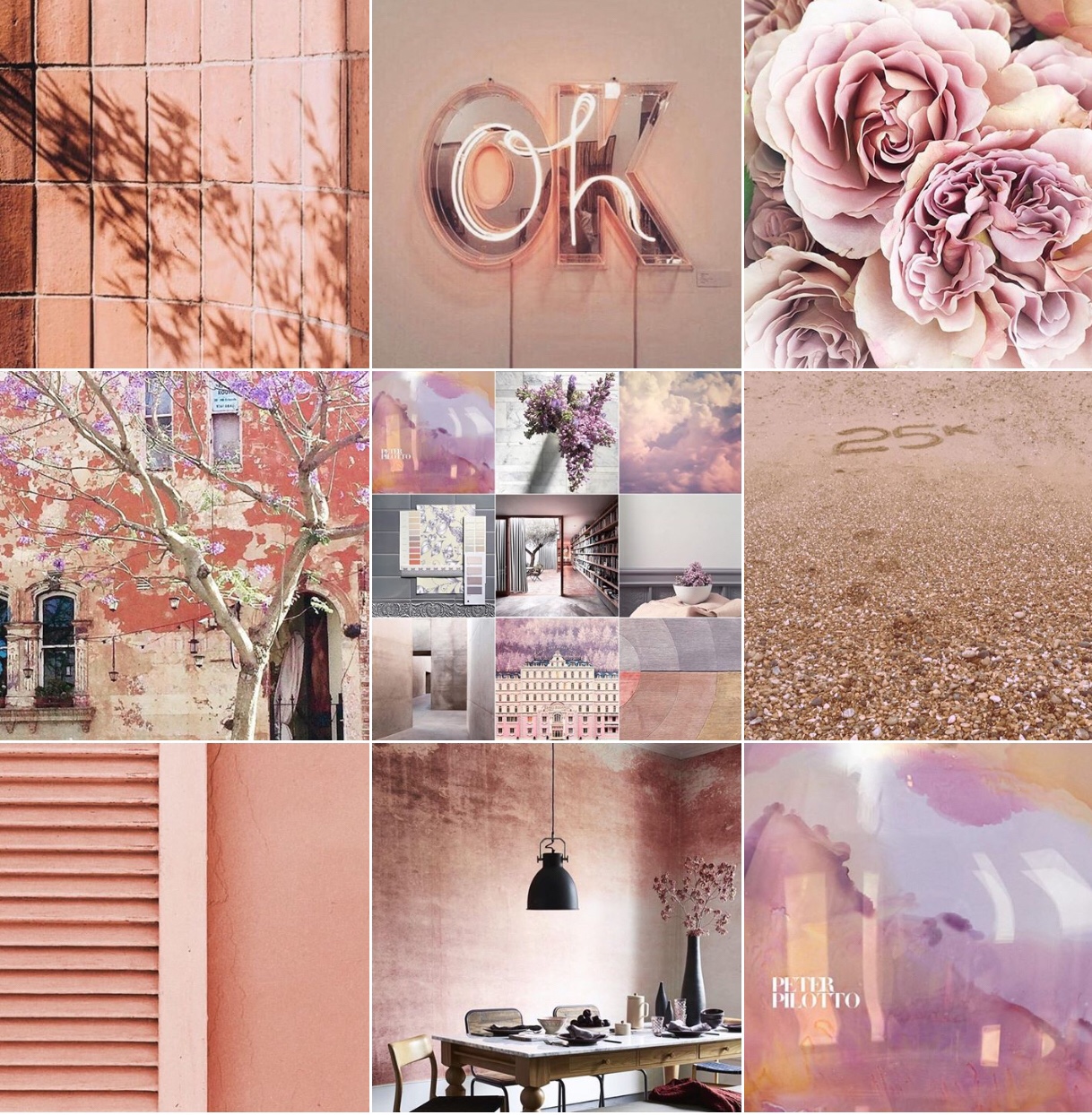 This is a return to the earth, the sand and the soil - and possibly the perfect accompaniment to natural materials like sisal and palm. We’re calling this soothing colour palette Desert Dusk, because it’s all about natural hues, with an inclination towards warmer tones and soft, feminine curves. 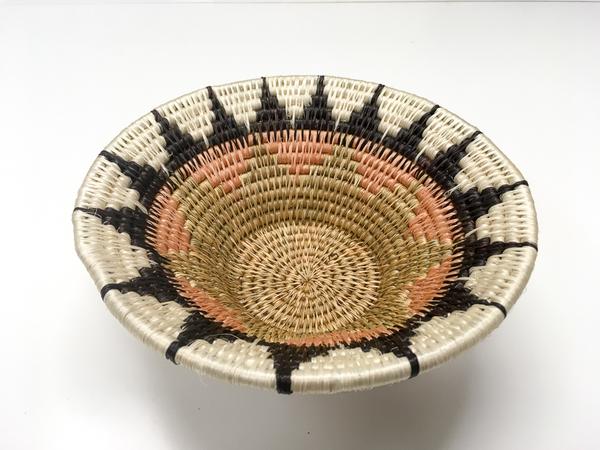 It’s a beautiful complement to the New Neutrals trend that took shape earlier this year, and it’s an ideal corollary of the everyday ‘super luxe’ trend that’s also big news at the moment – all that delicious velvet upholstery, marble and brass, and rich jewel tones we’re seeing in the homes and pixellated worlds of influencers like Erica Davies, @the_girl_with_the_green_sofa, and @thelondonchatter on Instagram. 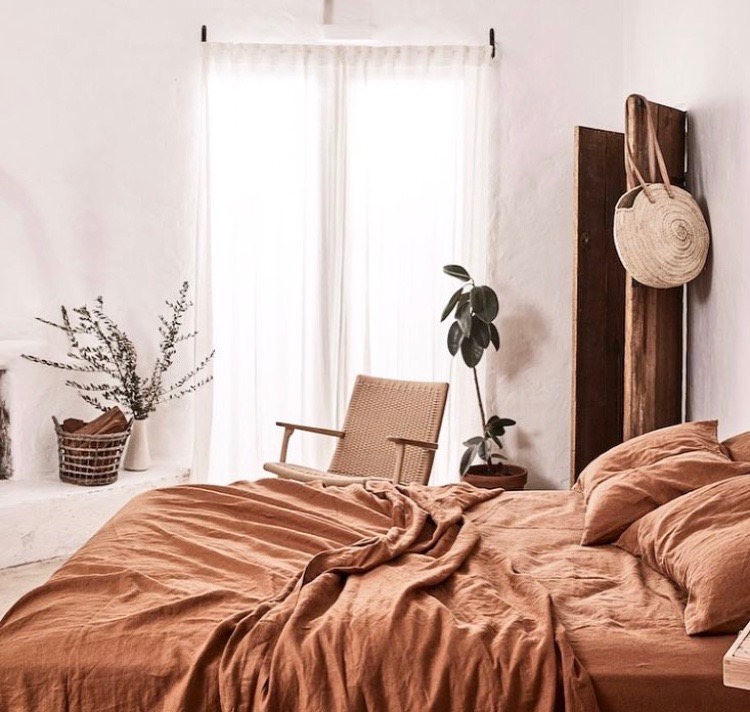 Elle Decoration’s Michelle Gundehin has written recently about the current rise of ‘povera’ finishes like rattan, bamboo, sisal and hemp being employed in the place of more traditionally ‘haute’ materials, and incorporated into the most luxe interiors spaces. 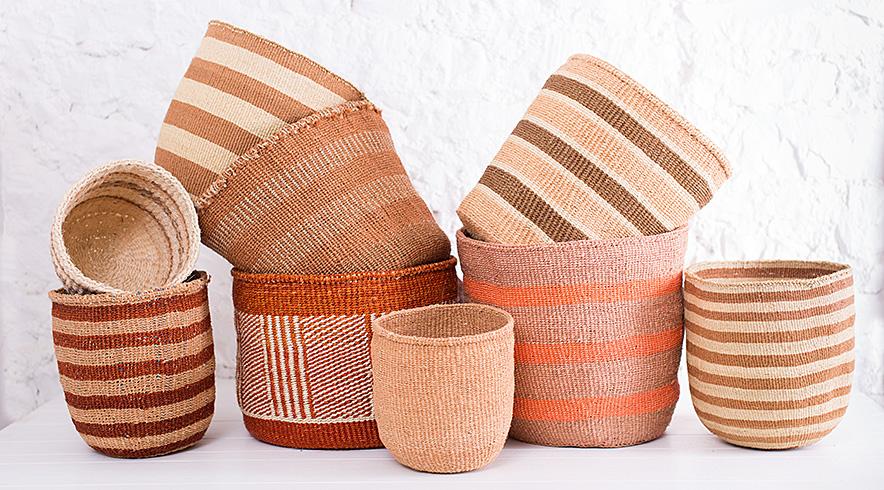 It’s possibly part of a more seismic shift towards more sustainable materials and practices in homebuilding that has led a renewal of interest in natural fibres in the interiors world, and this speaks directly to everything we stand for at The Basket Room.

Back in March this year, Camilla travelled across Kenya to meet the Ngurunit Weavers Group, the collective of 150 women who produce our beautiful Pambo Palm beaded baskets.  It’s vitally important for us to get to know the people behind our baskets, to hear their stories and to see first-hand how they live and work. And, ultimately, to bring these stories to our customers: the people who bring these baskets home. Closing the gap between maker and buyer keeps the supply chain transparent, and is the key to truly ethical, fair trade. So here's the story. It all begins in a village called Ngurunit. Ngurunit lies at the foot of the Ndoto Mountains, close to the arid Korante Plain and the Kaisut Desert. Drought is widespread here and livestock are dying. Food relief (a government scheme) is currently in action in Ngurunit, where livestock owners are incentivised to slaughter and feed from their own cattle by being paid the cash value of the animal. This is done to save animals from starving and going to waste, and to feed the people without families losing their precious investment. The weavers are semi-nomadic pastoralists (herding camels, cattle, sheep and goats) known collectively as Ariaal: not fully Samburu nor fully Rendille but a rich mixture of the two tribes. The Ariaal people are known for their peaceful ways and their openness to compromise, merging characteristics from both traditions - in house building, in bead making and in handicrafts – and they speak the two tribal languages interchangeably. The woven, beaded baskets they produce are possibly the best metaphor for this rich, multifaceted culture: the tight and traditional basket weaving technique developed by the Rendille tribe is complemented by the bold coloured, delicate beaded embellishments seen in Samburu tribal necklaces and headdresses. These tightly woven baskets were traditionally created by the Rendille people as vessels for collecting camels’ milk.  When made solely for this purpose, baskets were sealed with a camel colostrum coating on the inside and then regularly treated with wood smoke to keep them free from milk-spoiling microbes. But as plastic and metal jugs became readily available for collecting milk, the production of these baskets fell into decline and became an almost entirely forgotten art form until only very recently. It was in 2001 that access to market was achieved and these baskets found a place in the modern home as practical and attractive fruit bowls, bread baskets, planters and dressing table baskets. So whilst these baskets are structurally influenced by the Rendille, their beads are borrowed from Samburu culture. The multi-coloured layers of beaded collars, headdresses and earrings worn by the Samburu women denote not only marital status but also other clues as to a woman’s rank within the tribe. Beads, buttons and sequins in different colours can signify anything from her husband’s wealth to how many sons she has birthed. Yet despite all of this patriarchal symbolism, life has changed considerably for Aarial women in recent years. In this rural region of Kenya where milk is precious currency, women are now allowed to own milk-producing camels as well as milk itself. These delicately beaded baskets are symbols of empowerment for tribal women, and income from weaving helps mothers buy food and pay for school fees and transportation.

In purchasing a Pambo Palm basket you support the livelihoods of the Ngurunit people and become a guardian of this precious craft. Have a browse and shop the collection right here.

Summer's In The Basket Bag *HEAT KLAXON* Summer has LANDED! Whether you're off on your holidays soon or staying on home turf and doing the festival circuit this summer (and why not when the weather’s like this?) we'd love to see where you're taking your woven basket bags. It’s International Women’s Day on 8th March, and this year our rally cry is #BeBoldForChange. So earlier this week we caught up with two members of the Kenyan weaving cooperative we work with: Peninah and Florence. Here’s what these talented craftswomen have to say about being working women in 2017, and the barriers they have overcome through basket weaving and working within a cooperative.
March 07, 2017 — Alice West
Tags: African Baskets Colourful Baskets Fairtrade Inter International Womens Day Kenyan Weavers

Create a Boho-Inspired Interior with an Indoor Jungle This year we are seeing a move towards more natural home interiors; a reconnection with nature and with slowing down. ‘Greenery’, Pantone’s Colour of the Year 2017, is making us want to ditch the minimalism trend and bring the outside in. Our baskets and bags are now stocked in shops, from London to Oslo! In June 2015, The Basket Room ventured off-road, to visit three weaving cooperatives, with the hope of working closely with the women & establishing a long,working partnership. South-West of Nairobi, amongst the pineapple fields and hills, scattered villages are joined together by a very dusty & bumpy track.